Malti Marie Chopra Jonas is seen sitting by herself on the beach in a sunny new photo shared by Priyanka Chopra. Malti recently celebrated her first birthday. After sharing a series of sweet photos of herself with husband-singer Nick Jonas and their daughter, who turned one earlier this month, Priyanka Chopra shared another photo of Malti Marie Chopra Jonas on Wednesday. The actor went for a beach outing with her baby girl, and shared her photo on Instagram Stories. Along with Malti’s picture, Priyanka wrote, “‘Afternoons like this.” She added a bunch of emojis. Malti looked cute for the sunny outing, wearing a white and blue hoodie set. Also read: Priyanka Chopra keeps Malti close as they spend a lazy Sunday with Nick Jonas on the beach. See pics In the cute photo, Malti Marie Chopra Jonas is seen sitting by herself on the beach and looking towards the sun. Her back is facing the camera. Priyanka also shared a photo of herself as she stepped out with Malti. In the photo she shared on Instagram Stories, Priyanka posed for a mirror selfie inside her hotel room. She carried a designer bag, and wrote along with her photo, “Perfect Moment (clothing brand) and Sabyasachi, love it!” 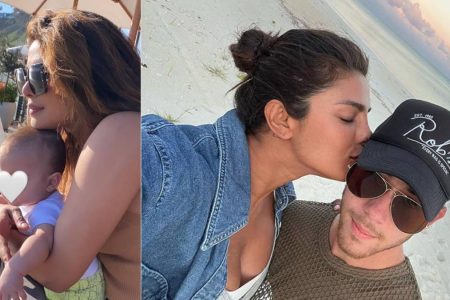 Earlier, Priyanka had shared photos from her and Nick Jonas’ family trip with Malti to Malibu, California. In one of the photos, Priyanka and the actor-singer smiled together as they posed in front of the ocean, while the actor held her daughter, whose face was covered by a white heart emoji. Last week, Priyanka had appeared on the cover of British Vogue’s February issue, in which Malti had joined her mom for one of the photos featured in the magazine. Their sweet photo showed Priyanka and Malti both in red as they posed in front of a red backdrop. Speaking about how baby Malti has changed her life in the interview, Priyanka had said, “It’s been 20 years of hustling and working at breakneck speed. I’ve always been like, ‘What’s the next thing?… But now I feel I have a centre, a sense of calm, because every decision ends up being about her.” Priyanka also added she is also always keeping her daughter close. She said, “I have, like, seven cameras in her room. There’s really nothing more satisfying than seeing her face as soon as her eyes open.” Meanwhile, the Jonas Brothers will be honoured with a star on the Hollywood Walk of Fame later this month. Nick shared the news on Instagram on Tuesday. The American boyband – made up of brothers Kevin, Joe and Nick – will be awarded a star in the recording category on January 30. In response to the news, the brothers thanked their fans for “the endless support” with a post on the band’s official Instagram account. Nick, too, took to Instagram to shared the news, and wrote in his caption, “Can’t wait for this! Getting a star on the @hwdwalkoffame with my brothers next week. Join us for the ceremony in LA or at WalkOfFame.com on January 30th!” Priyanka commented on his post, “So proud.”

Tunisha Sharma Suicide Case: Sheezan M Khan reveals some reasons why they fought and split up in November. It seems the actress’ side has said that he cheated on her with another woman The tragic demise of Tunisha Sharma has shocked the nation. At 20, she hung herself in the bathroom of the makeup room of her co-star Sheezan M […]

Amruta said even though she believed that it is good to adhere to “sanskruti” in public appearances, she did not want to give any suggestion to anybody. Actor and model Uorfi Javed, who has been pulled up by BJP leader Chitra Wagh for her costumes, has received support in Amruta Fadnavis, the wife of deputy Chief Minister Devendra Fadnavis. “I […]

Urfi Javed wrote in her post that that there is no article in the Constitution that can actually send her to jail, and questioned the politicians asking why they don’t have anything better to do. Celebrity Uorfi Javed has written a scathing post after BJP Maharashtra Mahila Morcha President Chitra Wagh filed a complaint against her for ‘roaming the streets […]

TikTok girlies, watch out: Camila Cabello is coming for your gig, for she’s only gone and debuted her latest haircut and it’s one that went viral on the app not so long ago. But before we get into her waxing lyrical about the very on-trend style, let’s just take a few moments to mourn her much loved Y2K streaky highlights… […]